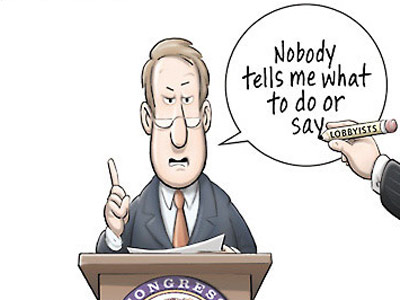 Lobbyists are powerful, influential and unelected folks who get Congress to do their bidding. What do youth need to know about these key players?

Who are these people?

If you read Part One of our Youth Guide to Politics you heard me drop “the L-word” because many organizations, companies, and unions have lobbyists and political action committees (PACs) and use them to get the laws they want passed. But Yukon High School American history and government teacher Ed Brown says he doesn’t spend a lot of time talking about lobbyists. “We don’t get into specifics,” he said. Instead they just “talk about what they do and their function, how they have to register. We talked a little about who they work for but in the broad sense–that they work for some ideology groups or organizations.” Brown said like anything they discuss in his 11th and 12th grade classes some students were interested and others were not. Some know about [Jack] Abramoff, and some don’t.

If you grew up watching episodes like this on The West Wing or you ever caught an episode of K-Street on HBO, then you have a pretty good idea of what these mysterious news grabbers called “lobbyists” do. But let’s pretend you’re not a politiholic and you’re interested in more.

Lobbyists represent the interests of specific groups on Capitol Hill and in statehouses across the country. They have many different forms of services, including watching legislation that is of interest to your org or company, drafting legislation, finding elected officials to sponsor a bill and the tricky one–making sure the bill that you want to pass sails through.

To get a better picture, watch a clip from the short-lived HBO series K-Street. The real K Street is a city block in Washington, D.C., where most of the lobbying firms are located. This scene is a good example of a lobbyist in action talking about pirating music:

In our world, the capitol is like your high school, which would make teachers like the members of Congress–we’ll call the speaker the principal. How do you get the teachers and the principal to do what you want? You lobby them, right? So you have a lot of different people who “lobby” in your school. You’ve got the student council, who is like the go-between–they lobby on behalf of the student body to the teachers and administration. Then you’ve got the suck-up brown-nosers who can work everyone over. Congress is pretty much the same.

This scene from the film Thank You for Smoking illustrates lobbying perfectly:

We mostly hear stories about lobbying that involve swanky golf trips to tropical islands, paper bags filled with cash, and men dressed like Boris on that classic 1960s cartoon Rocky and Bullwinkle. But beyond that trench coat is a complicated subject that even Congress isn’t sure how to tackle.

According to The Citizen’s Guide to Lobbying Congress

“Our Constitution guarantees all citizens the … right to petition their government for … grievances and the freedom to state their views without government interference.”

Anybody–you, me, Rocky, Bullwinkle–have the right to be heard. But sometimes there are voices that are more powerful and come with free stuff. If you’ve ever filled out one of those “email your representative” forms, that means you have lobbied. But some people–when they lobby their representative–do it over a beach weekend or an expensive dinner in a fashionable Washington bistro.

Essentially, these guys are the suck-ups in your school. They are the students who are bringing the teacher the apple. Only in Congress it’s more like a platinum, digital, diamond-encrusted apple specially engraved to remind you of your favorite.

A young multistate lobbyist, who would rather just be known as Charlotte, lobbies on behalf of a membership association/union. She fears giving us her name because it might compromise their legislative agenda. “I understand the big corporations, and I fight against them. I can buy drinks and dinners here and there, but I’m not one of those expensive Armani suit-wearing guys from Thank You for Smoking, who are swigging scotch and catering committee hearings. I have a membership that votes on issues that I lobby for, but I can’t speak to any of the members of Congress because I’m not a federal lobbyist, nor am I a constituent–I just represent their constituents.”

Charlotte believes in her members and organizes Days at the Capitol in one of the states in which she works. “These people, many who are younger, give up a whole day of work, with no pay to stand up for what matters most to them. I consider us lucky when we hold ground on any of our issues. Then I see a Washington, D.C., lobbyist fly in for two hours and get allowances to screw the state, trash the environment, and get everything they want.”

This, among others, is a major reason presidential candidate Sen. John Edwards has refusedto take money from lobbyists, “Today, lobbyists approach politicians with campaign checks in one hand and wish lists in the other,” he’s said.

The same was echoed by David Donnelly of the Public Campaign Action Fund earlier this year: “It sends a mixed message to be, on one hand, say that you are clamping down on lobbyists, but then raising money from the very same lobbyists that they say are part of the problem.”

So, while it shouldn’t matter if its you lobbying through email or Boris and Natasha smoking a stogie at Signatures, let’s face it, you and me sending an email is a lot easier to ignore than the platinum apple.

This all came to an explosive smackdown in the last six years when Republicans held all branches of government. Republican Representatives worked with Republican lobbyists to further disenfranchise anyone who opposed Republican policies. Lobbyists like Jack Abramoff funneled millions of dollars into the pockets of members of Congress and campaigns while also manufacturing opposition to their clients to gouge them for even more money. All of which became the biggest congressional corruption scandal in generations.

That’s why Democrats campaigned on lobbying reform during the 2006 election. America was peeved!

“Something needs to be done from preventing any political party of another K Street Project,” says Chris Fadeff a former Democratic congressional aide turned law student–he worked for his representative during this difficult point in our history. “The Republicans, led by Tom Delay, were able to construct a system where campaign contributions directly translated into legislation and pork barrel projects, almost to the point of a quid pro quo.”

Several months after raising their right hands, and after a powerful speech by Majority Leader Steny Hoyer, Congress finally heard the demands and passed the promised reform on lobbyists.

“But there is little hope this is any kind of meaningful reform,” Fadeff says. “I’m not convinced that the main stream reforms such as limiting meals, entertainment, travel and increasing disclosure will prevent another project from occurring.”

Presidential candidate Sen. Barack Obama thinks more enforcement is needed by parties that are capable of remaining neutral. “Congress can pass all the ethics rules it wants, but without meaningful independent enforcement, these new rules are less effective,” he says.

Charlotte agrees that the lobbying reform laws are bad and do little to prevent the ethically challenged. “Things are really hard for me at the federal level. I can’t even have a conversation with, let’s say Rep. Boyda, for example.” She says that many of her members are affected by things like State Children’s Health Insurance Program, but she can’t talk to Boyda about that issue when she is back home, because it’s illegal.

“It really affects unions and memberships the most,” Charlotte says. “They’ve been raped and pillaged to the extent that no one can talk to anyone anymore.”

You as a lobbyist

While so many Armani suit-wearing folk get play in the media, most representatives and their staff will tell you that citizen lobbying forces are more powerful. “They definitely have influence on the role she plays in local issues … whether it’s the money she brings back to the district or the local issues she throws her weight behind,” Fadeff says about Rep. Woolsey. “But part of that is how well-organized they are in her particular district.”

One of the most powerful efforts we’ve seen this past year is the work being done to stop the genocide in Sudan. Organizations like Save Darfur have a huge lobbying force in young people that lobby their officials to get involved, fight their universities to divest, their financial holdings that fuel the genocide and forcing their churches to get involved.

Another is the Climate Crisis. This summer was the first-ever Live Earth concert to urge everyone to fight for the planet at all levels from individual lifestyles all the way to the White House. Thousands attended, and millions committed to action online. But lobbyist Clay Pope of the Oklahoma Association of Conservation Districts uses mostly an older retired lobbying force for his issues. “It’s local politics at its best,” he begins. “If one guy is upset with you (a representative), he just doesn’t vote for you. If you upset some of the women in our community, not only do they not vote for you, their husbands don’t, their kids, their families don’t. Everyone they know won’t support you or your issues. These people have power.”

But Jane Fleming Kleeb of Young Voters PAC would encourage Clay to look outside the box. “Of course young people are central to our strategy, just like the hundred of thousands of voters of all ages who are excited about change…”

Click here to read the rest of the article!