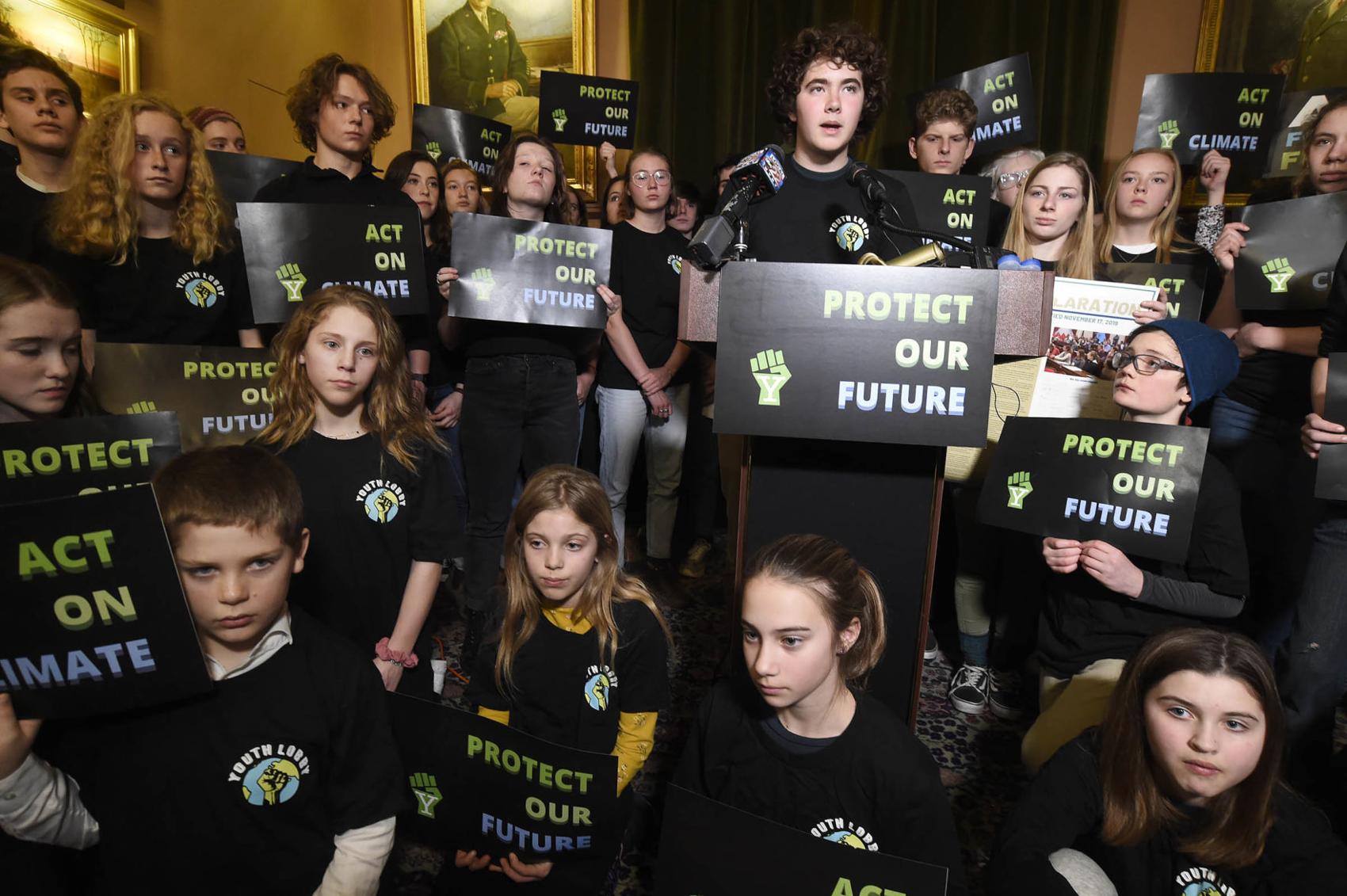 Hi, my name is Gabe Groveman, I’m a sophomore at Montpelier High School and a member of the Vermont Youth Lobby. I’d like to bring this all home with a few points on specific upcoming Climate Change legislation that the Youth Lobby would like to see passed. Now that the legislature is back in session, we have the ability to put our words into action and actually pass meaningful climate legislation in this state. Already, we have 5 different bills, each trying to do their part to help with the Global Climate Crisis we’re facing right now.

First, there’s the Global Warming Solutions Act – Bill H. 462, which aims to set Vermont on a path toward meeting our commitment to the Paris Climate Accord by 2025 and achieve net-zero carbon emissions by 2050, by creating targets with a comprehensive process to achieve them. This bill would ensure that if these targets are not achieved, we have a way in which the people of Vermont can hold their legislators accountable and would hopefully keep our energy spending in state and put people to work in clean power jobs such as solar, advanced wood heat and electrification. Although these are all great things, and the Vermont Youth Lobby supports the work these legislators are doing to help draft legislation to combat Climate Change, we do have some concerns and suggestions to the bill that, as youth, we feel should be addressed. One is that according to the Intergovernmental Panel on Climate Change we need to act much faster than this bill suggests, for example, the Young Vermonters United Climate Declaration states 2032 as the goal for net-zero. We’d also suggest that we have goals set for every five years so that progress can continue on track and be checked and that the abrogation clause needs to mandate the creation of a new bill or measure to ensure that local and state officials are still held accountable once we enter into a multi-state deal OR the abrogation clause should be removed altogether. Youth Lobby would also like to address that there is no outlined power given to let the judicial system force legislators to take action, only the ability to force damages payment and that the Government Accountability committee needs to also have the responsibility to bring departments and legislators to court if goals are not being met or progress is slowing because of them.

Another bill that the Youth Lobby would like to see passed is Modernize Energy Efficient Utilities, which would shift Efficiency Vermont’s standard for success from energy reduction to greenhouse gas emissions reduction, Increase affordability of heating for homes and businesses by investing in weatherization, Bring new technology into the state to help modernize efficiency, like cold climate heat pumps, Increase collaboration between energy efficiency and distribution utilities, and Expand the availability of weatherization to reduce individual Vermonter’s system costs. We’d also like to suggest that we ensure that the data collected on results is made easily accessible and understandable to the Vermont public.

Another action around Climate, that the Youth Lobby would be on board with supporting, is Vermont participating in the Transportation and Climate Initiative, or TCI, which would try to reduce carbon pollution from transportation by investing in cleaner, more environmentally friendly, transportation options, like electric buses, hybrid and electric vehicles, bike and pedestrian infrastructure, and affordable housing, as well as ensuring the protection of low-income Vermonters as we transition into a more efficient state. Like the other bills, we have some more concerns we feel need to be addressed. One concern is that cap and trade, and invest systems, could allow those who profit most from the climate crisis to buy their way out of accountability while leaving smaller businesses behind to suffer the consequences, and that the increased cost of fuel will not incentivize electric alternatives as much as penalize working-class Vermonters, which we should absolutely avoid doing. We’re also worried that Cap and trade, and invest systems, have been shown not to work as well when scaled past small populations and that if the purpose of TCI is to tax fossil fuel companies and use the money to invest in green solutions, there needs to be sound measures in place to protect the working people from the negative impact of raised gas prices. And once again we would also like to recognize that according to the IPCC, we’ll need to act much faster than what this bill proposes.

Another bill, 100% Renewables by 2030 – H. 316/S. 51 which is not currently proposed, (past bills were for 90% by 2050), would do a lot of good if passed this session. It would hope to get us to 100% renewable electricity for the state of Vermont by 2030, replacing inefficient fossil-fueled vehicles and heating with efficient electric options and keeping money spent on imported energy in state. This would be great as long as we make sure that it is changed to 100% renewable by 2030 and add conditions to ensure rapid expansion, roll out, and incentivisation of renewables does not come at the cost of our natural ecosystems and resources, like by bolstering and requiring environmental impact studies of all new projects, and prioritizing widespread low impact solutions before potentially damaging ones and taking wildlife and recreational land use into account with all new projects, as well.

Senator Pollina’s VT Green New Deal bill, which would create a tax that would take an extra $30 million annually from Vermont’s top 5% for 5 years and put it towards climate solutions including transportation, weatherizations, and EV incentives, would also be something we would like to get through this year.

These are all reasonable and comprehensive initiatives that, all together, could help pull Vermont in the right direction in the global effort to fight climate change. Yet, to become a reality these bills would have to be approved by, not only, a majority of the legislators in this building, but most likely by Governor Phil Scott as well. We sincerely hope that what’s been said today, and the continued presence of the Youth and other climate supporters will be enough to sway Governor Scott to do what is right, and support legislation that will help ensure a healthier future for Vermont and the world at large. Because, at this historical turning point of Climate activism, it would be a shame if Vermont, one of the most progressive and forward-thinking states in the country, would fall behind on arguably the most important issue of our times. So, in 2020, let’s show the world just how much we care about the Climate and our future, by supporting meaningful legislation that the legislature and the governor can, and hopefully will, actually pass. You can all start right now, by delivering the Young Vermonters’ United Climate Declaration to legislators around the State House.