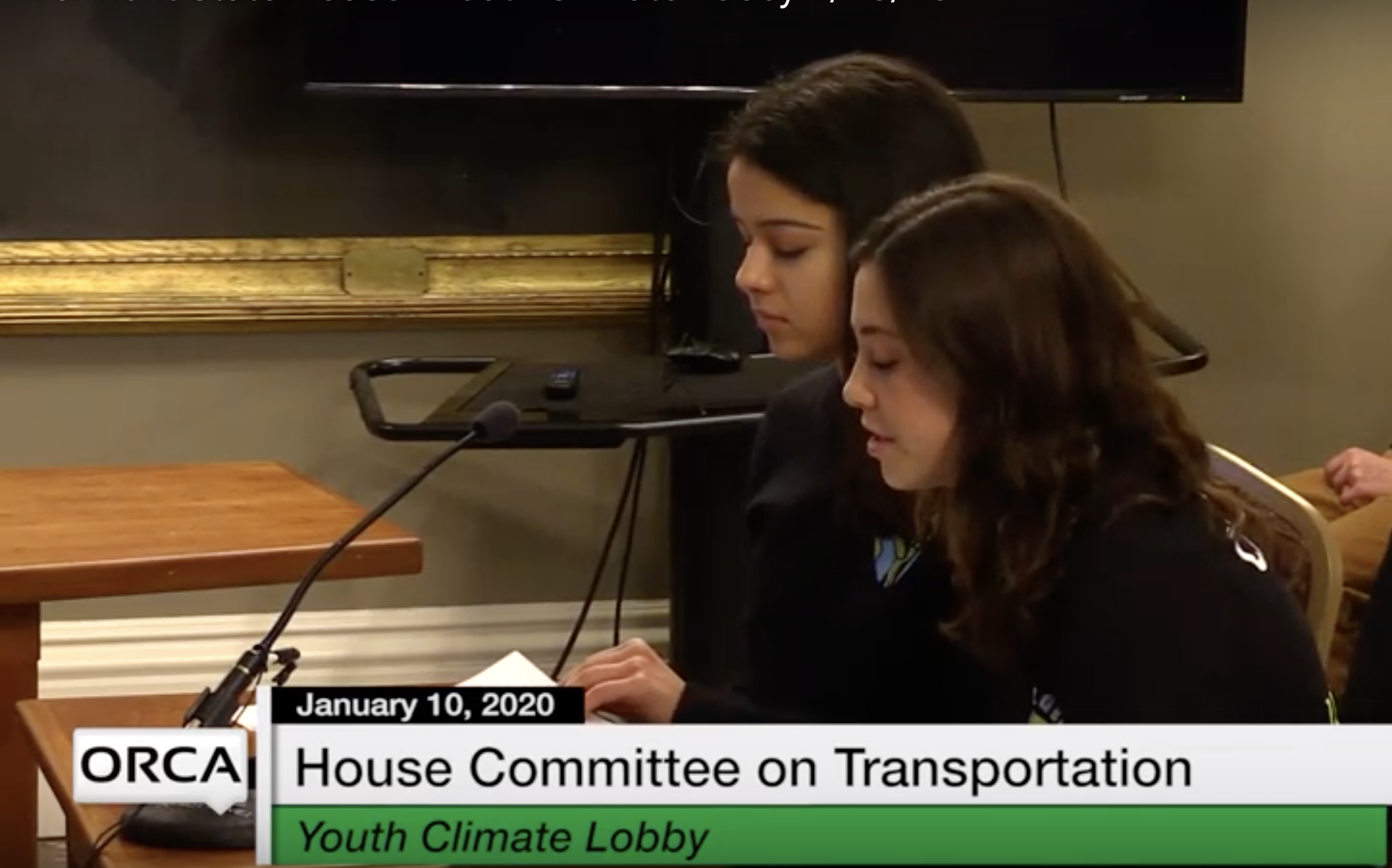 Thank you, committee members, for the opportunity to meet with you today. My name is Hope Petraro, and I am a senior at Montpelier High School and a member of the Youth Lobby. Some of you might recognize me not just because I’m frequently in the building because of my advocacy and activism, but because I’ve interned with Mollie Burke for the past two years, a person who I am truly grateful to have had the ability to work with.

Thank you for your time today. My name is Lili Platt and I’m a senior at Harwood Union High School and an officer of the Vermont Youth Lobby, a statewide, student-led organization that fights for climate action and justice. As you know, we are facing an unprecedented global emergency. Just thinking about the magnitude of the climate crisis can be so terrifying that it paralyzes people. But the science is clear, and it is becoming clearer every day that we must do something–and fast. To us, climate change is not a political issue; it is an existential threat—the effects of which we have only begun to feel. I am angry that those least responsible for climate change are predicted to suffer the most from it. Regardless of what we like to think about Vermonter being a green state, the facts say otherwise. Vermont is not doing its part to address this crisis. Since 1990, Vermont’s carbon emissions have risen by 16%, while climate pollution in all of our neighboring states has fallen. As overseers of Vermont’s transportation policy, you have a unique opportunity and responsibility to act for serious climate action this session.

We appreciate your past commitments to reduce emissions and to fight climate change. In 2017, many members of this committee voted in favor of H.R.15, a resolution that opposed the announced U.S. withdrawal from the Paris Climate Agreement and supported Vermont’s enrollment in the U.S. Climate Alliance. H.R. 15 opposed a world in which the United States — instead of using its power and wealth to serve as a role model on climate action — reneged on its commitment to reduce greenhouse gas emissions 26–28 percent below 2005 levels by 2025 and its commitment to contribute $3 billion to climate change assistance to developing nations by 2020.

Combating climate change — something scientists have called the “biggest global health threat of the 21st century” *PAUSE* is not limited to one resolution. And the word resolution has two meanings: it isn’t just an agreement passed by a legislative body — it’s a firm decision to ACT. Supporting emissions reduction takes an active effort, but with our current policies and regulations, Vermont is not on track to meet its own emissions reduction goals. We’ve committed to 90% renewable energy by 2050, but as of 2015, only 16% of Vermont’s total energy consumption was powered by renewables.

We’re here today to share and ask you to support the Young Vermonters’ United Climate Declaration.

Some of the Declaration is broad, including our request that the Vermont State House:

Some of the Declaration is specific to transportation, including our recommendations for the following:

The largest segment of Vermont’s greenhouse gas emissions comes from the transportation sector, and at a figure that consistently hovers around 45%, that represents nearly HALF of all emissions. As legislators on the House Transportation Committee, your actions are critical, and it is critical that you prioritize climate change. In moving away from fossil-fueled transportation, Vermont can develop an equitable program to generate revenue that can help all Vermonters invest in and make use of cleaner transportation alternatives.

There is growing popular support for climate action — according to a very recent poll, more than three-quarters of Vermonters support Vermont’s joining of the Transportation & Climate Initiative, *PAUSE* and more than three-quarters of Vermonters support requiring the state to hit its climate targets. *PAUSE* By moving away from fossil-fueled transportation, Vermonters can reduce carbon pollution and can save money at the same time. Studies have shown that in our most rural counties in the Northeast and Mid-Atlantic, the average driver can save $870 per year and cut carbon dioxide emissions by more than 3 metric tons per year by choosing an electric vehicle over a conventional sedan.  Shifting transportation away from single-occupancy vehicles towards low-carbon alternatives like buses, trains, biking, and walking not only helps us meet our emissions reductions goals, but can literally change lives. Expanded public transportation infrastructure would greatly lessen the burdens that transportation often poses to low-income and rural Vermonters, especially those living in fuel poverty. A lack of available commuting options prevents low-income people from leaving their towns and accessing the jobs, resources, and enrichment they need to improve their lives.

Yes, these are ambitious goals, but ambition and drive are nothing less than necessary if we are ever to meet our commitment to the global and statewide agreements we have agreed to. Taken together, these recommendations can put us back on track to meet the climate commitments that Democratic and Republican governors and lawmakers alike have made to our generation: our commitment to 90% renewable energy by 2050. Again, we must do our part. And more importantly, as legislators in Vermont, YOU must lead the way and prove to other states that we can make this transition away from fossil fuels and toward a more prosperous, more equitable, and brighter future.

Last night — instead of studying for the French test I have later today, or doing my homework for AP Economics — I was up late finishing this testimony, carefully writing it in the hopes that it will be good enough: that it will match the caliber of the testimonies and speeches you might be used to hearing, from professionals who are paid to do this every day, who don’t spend their hours at school instead — in the hopes that my words, my testimony, is good enough to make enough of a difference. So that it is something you will carry with you throughout the session this year, as you make decisions, set priorities, and negotiate with opposition. Lili and I, and many others our age, throughout the years, have skipped school and skipped out on sleep so that, in addition to all that we do — whether it’s soccer, or working, or high school — we can do our part in advocating for efficiency, affordability, leadership and initiative, and social justice. A commitment to serving others is a principle that guides your lives as legislators, and it is a principle that guides mine as well.

For many young people today, climate anxiety has steeped itself into the back of our minds. Those who prioritize climate change understand it is a crisis — understand that climate change is already affecting us and is a growing obstacle to ensuring every person in every community has the ability to live with stable weather patterns; to swim in and drink from clean, safe water; to breathe unpolluted air; to live free from forced migration; to have access to food; and to live unencumbered by civil conflict and disease. We understand that the world has already warmed by about 1 degree Celsius and without a global coordinated effort — one that we as Vermonters and Americans must be apart of — the world will reach 1.5 degrees in as little as 12 years. We understand that “several hundred million” lives are at stake, according to the IPCC. We understand that the actions that are required to ensure a just transition to a fossil-fuel-free world have a significant overlap with the actions that would be needed to reduce global poverty. We understand that if we don’t act, literal science states that “Whole parts of the globe will become too hot for human habitation and those left behind will die of heat. Diseases will increase and mutate. Food shortages will become chronic as we fail to move agriculture from one climate to another. Whole countries like Bangladesh and parts of other countries, such as Miami, Florida, will be underwater. Shortages of freshwater will affect humans and agriculture. The oceans will die, the air will get dirtier.” Social, economic, and political chaos will ensue as refugees flee areas that can no longer sustain them.

Although you and I can enjoy spending time with family, reading a book, going out for a bite to eat or for a run outside, and can afford to live and work relatively comfortably, there are people in the world who are being affected by climate change already — who do not have the privilege of living and working relatively unperturbed by the effects of climate change.

We have two asks of you today.

At its most basic level, Youth Lobby is asking for policymakers to ensure that as a state we are doing our part to reduce GHG emissions to a level that is consistent with a livable planet. We simply want the state of Vermont to abide by the obligations we made to meet the goals of the Paris Climate Accords and to listen to the IPCC and the urgent and most current science. It is imperative that we act soon to prioritize combating climate change and make the switch to clean energy, infrastructure, and livelihood. Thank you for the opportunity to be here today. We’re happy to answer any questions if necessary.

See all posts by Lili Platt